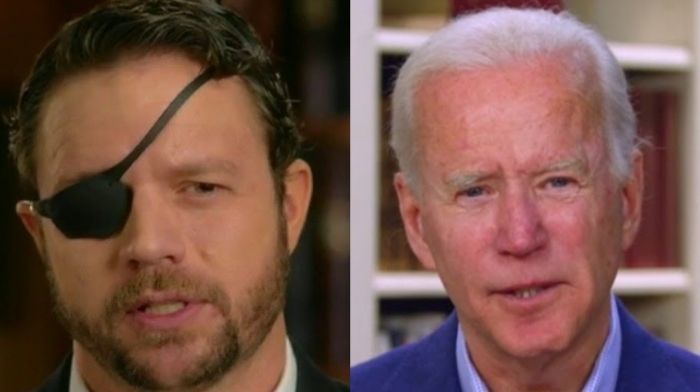 Rep. Dan Crenshaw (R-TX) went on “Fox & Friends” on Monday morning to slam President Joe Biden for withdrawing troops from Afghanistan after the Taliban took over the country’s capital.

Crenshaw went so far as to say that Biden’s “incompetence” has led to the Taliban’s takeover, which means the world is now “a lot more dangerous.”

“It just blows my mind that this is where we’ve come to,” Crenshaw told Fox News. “I’ve been beating this drum for a long time trying to explain to people that you send people like me over there so that you fight them there instead of here.”

“There’s a lot of intelligence that demonstrates that the people there do want to commit terrorist attacks here on the homeland. They always have,” he continued. “This is what they do. They hate Western civilization.”

“And I wish we lived in a different reality. And if people want to live in that reality, well, they can go write a fiction book about it, but I live in the real world,” the Republican said. “And the real-world just got a lot more dangerous because of this kind of incompetence.”

“To say this is an endless war?” Crenshaw stated. “We haven’t had a combat casualty in Afghanistan for 18 months.”

Sign up to receive the latest political news, insight, and commentary delivered directly to your inbox.

This comes after former President Donald Trump spoke out to demand that Biden resign over the mess in Afghanistan, according to The New York Post.

“It is time for Joe Biden to resign in disgrace for what he has allowed to happen to Afghanistan, along with the tremendous surge in COVID, the Border catastrophe, the destruction of energy independence, and our crippled economy,” Trump said.

Meanwhile, Biden has tried to blame Trump for the situation in Afghanistan.

This piece was written by James Samson on August 16, 2021. It originally appeared in LifeZette and is used by permission.

Read more at LifeZette:
CNN’s Jake Tapper Says It’s ‘Shocking That President Biden Could Be So Wrong’ On Afghanistan
Is Chris Cuomo Out At CNN?
Kamala Harris Seen As Fake, Unelectable

The opinions expressed by contributors and/or content partners are their own and do not necessarily reflect the views of The Political Insider.

Biden Adviser Blames Afghan Army Rout on Lack of Resolve: ‘We Could Not Give Them the Will’

Trump Slams Removal Of Robert E. Lee Statue: ‘Our Culture Is Being Destroyed’

Sep 9, 2021
social media
Top News: Bbc-news
You have made too many requests recently. Developer accounts are limited to 100 requests over a 24 hour period (50 requests available every 12 hours). Please upgrade to a paid plan if you need more requests.